I don’t believe we could have found a smarter, better looking Labradoodle: Vancouver, WA 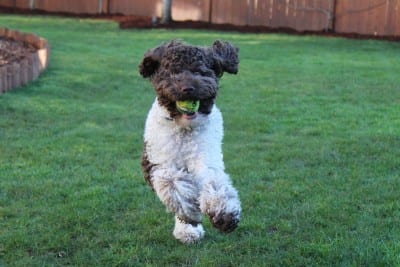 My family and I visited a number of local Labradoodle breeders to ensure the newest addition to our family would be “just right.”  Researchers by nature, my wife, and I had a list of very specific criteria we needed to have met before we took the plunge into pet ownership.

During several of these kennel visits, we oftentimes felt like the conditions of the facilities and the “sales tactics” of the breeders were not up to our high standards.  It goes without saying: we were disappointed.

When we began to second guess our Portland-Metro Area search, we found out through a friend that Stacey Smithers at Golden Xpress Australian Labradoodles had a recent litter of medium-sized puppies.  We made an appointment with Stacey to visit the puppies at her home/kennel and were immediately impressed with the facility.

Stacey’s Labradoodles are raised on her property in well-kept kennels and have constant contact with other puppies and humans (including her own children).  As we approached the current litter on our first visit, it became very apparent the dispositions of these dogs were different – they were outgoing, gregarious, friendly, and showed no signs of being timid or afraid.  We had yet to come across such well-balanced puppies.

My two daughters, wife, and I had our eyes on a little brown and white boy named Charlie, and from the get-go, it was apparent he would be ours.

Fast-forward to today: Charlie (we kept his original name) is now 10 months old.  He is the happiest, friendliest, and most mild-mannered puppy we have ever been around. Many times, people comment that they can’t believe he is a puppy.   It is very clear to us that his disposition and temperament are natural products of intentional and knowledgeable breeding.

Charlie is smart and was, quite frankly, easy to potty train.  We can count on one – well, maybe two hands – the number of accidents Charlie has had in the house.  In addition, Charlie exhibits no signs of aggression towards humans and/or other animals.  He is “firmly handled” by our seven-year-old daughter, yet never gets angered by her attention and play.  Through Stacey’s guidance, he is kennel-trained and has made our lives and pet ownership much easier than we anticipated.

Charlie is the loyal family dog we have always dreamed of.  And, to boot, he is extremely handsome.  A walk with Charlie does not go by when people don’t comment on his color, his coat, and his overall friendliness.  By the way, Charlie doesn’t shed a bit, which was part of our criteria.

In short, I don’t believe we could have found a smarter, better-looking Labradoodle with the type of unbelievable disposition Charlie has.

Golden Xpress Australian Labradoodles, price their puppies extremely well, raise them with care, and continue to support the families that adopt them from day one through the process of pet ownership.