Merle Australian Labradoodles, what are they? 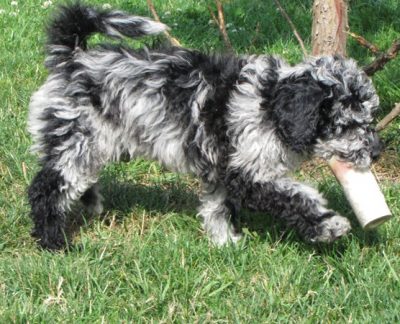 Merle is a color, a genetic pattern that can appear in a dog’s coat coloring.  There are many color variations in the merle coat, chocolate, red, blue, parti and phantom are some common colors we produce.  The merle coloring in the Australian Labradoodle came from the Cocker Spaniel and the Poodle lines.  The true Australian Labradoodle was designed in the 1970s for the purpose of providing a service and therapy dog to families that suffer from illness or allergies.  The breed is allergy-friendly they produce little to no dander, however, some individuals are allergic to the saliva a dog produces.

In the late 1970’s the Guide Dog Association of Australia set out to produce a non-shedding dog suitable for service training. Mr. Wally Cochran was the driving force behind this program, and the goal was to produce a non-shedding guide dog.  The Australian Labradoodle is a cross between six AKC bred dogs the Lab, Poodle, Irish Water Spaniel, English, and American Cocker Spaniel and the Irish Soft Coated Wheaten. The diversity of these bloodlines have the potential to safeguard the breed from genetic health problems of inbreeding. 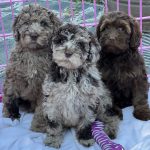 The result of these crosses produced intelligent, easily trainable puppies that were the beginning of the Australian Labradoodle as we know it now.

Overall, the Labradoodle is a fun loving, quiet, calm yet comical, loving companion for families as well as a fantastic service animal, being easily trainable, loyal and intelligent. The Labradoodle is not a recognized breed as yet, however, many breeders are working towards developing a breed standard for the future recognition of the Australian Labradoodle. 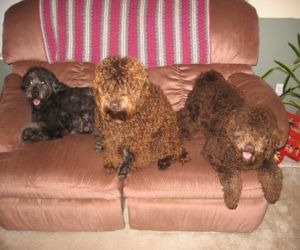 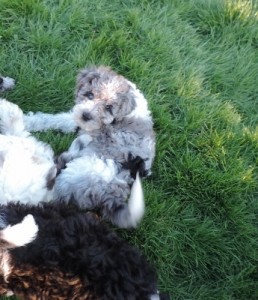 Merle can affect all coat colors in many different breeds.  The merle forms of red, brown and black are usually called “red”, “chocolate” and “blue” as patches of creams and grays formed throughout the coat.  Some dogs are affected by merle, but the patches are either hardly seen or not visible at all.  This is why it is essential to have all dogs in a merle breeding program tested for coat color, DNA or blood testing can be done.  Combinations such as brindle, sable, phantom or parti merle colors also exist.  In addition merle colored dogs have blue and green eye coloring.

In the Labradoodles this gene has been brought into the Australian Labradoodle from the merle poodle and or the merle cocker spaniel.  We have been breeding merles Australian Labradoodles for 20 years and all of our breeding dogs have been full tested since day one.  We work to breed every dog better than the first, always breeding a healthy well balanced dog with a happy disposition and a non shedding allergy friendly coat .

The three main colors are:

Variations on these three colors can also include a parti gene making the dog have large patches of white mixed with the color and a phantom gene giving the dog tan points.

In addition, these great dogs are hypo-allergenic and non-shedding, Merle Australian Labradoodles have their characteristically wavy fleece coats, their intelligence, their upbeat nature and their incredibly friendly temperaments. As such, it is no surprise that these dogs are fast becoming among the most beloved breeds available.