The Australian Labradoodle is a breed created from foundation stock of: Lab, Poodle, Irish Water Spaniel, English and American Cocker Spaniel, and finally the Irish Soft Coated Wheaten. The diversity of these bloodlines have the potential to safeguard the breed from genetic health problems of inbreeding.

In the late 1970’s the Guide Dog Association of Australia set out to produce a non-shedding dog suitable for service training. Mr. Wally Cochran was the driving force behind this program, and the goal was to produce a non-shedding guide dog. The result of these crosses produced intelligent, easily trainable puppies that were the beginning of the Australian Labradoodle as we now know it.

Crossing these breeds together compliments the Australian Labradoodle giving these wonderful dogs a hybrid vigor and a variety of coat types: 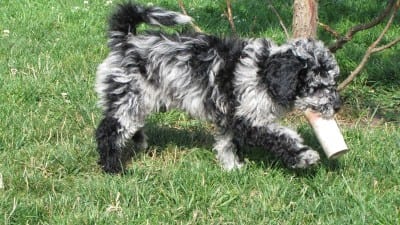 ‘Merle’ is a dilution gene. A color gene that dilutes the base color into a myriad of lighter colors without a pattern. The dilution can be seen in the coat, the skin, and occasionally the eye pigment. This is the most beautiful trait as one or two blue eyes can be very striking. It is one of the more complicated genes which is truly fascinating to a breeder.

Merle Labradoodles come in two main colors: black or chocolate. Blue merle is a blue-gray color that is carried over through black dogs and a chocolate merle which is a diluted color from chocolate in the Australian Labradoodle breed. Variations on these two colors can also include a parti gene making the dog have large patches of white mixed with the color or a phantom gene giving the dog tan points. Australian Labradoodles are known for their characteristically wavy fleece coats, their intelligence, their upbeat nature, and their incredibly friendly temperaments. As such, it is no surprise that these dogs are fast becoming among the most beloved breeds available.